This movie is based on a set of books written by Kalki in the 19th century namely Ponniyin Selvan talking about the Great Chola Empire, the people of those days, the culture of Cholas, the Architecture of Chola, and the intense politics involved in the Empire by explaining the Travel of a character namely Vandhiya Thevan.

From the first scene of the movie, with a voice-over of actor Kamal Hassan, we can get straight into the movie and its field.

The subsequent scenes of the movie take us on the floor of Chola Empire ruled by Sundara Cholan between the sky and Chola soil.

I could feel that the man Kari Kaalan ( Aditya Karikala Cholan ) has lived like a lion on war fields since from the introduction scene of him with the roaring acting of Vikram, the way how the war scene of Chola Vs Rastriya Kingdom was screened. Especially the acting of Vikram by sitting on his horse by holding his sword and going around the opponent king who is on his knees on the floor. 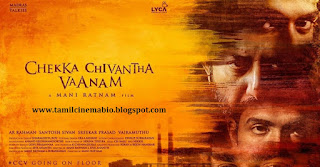 In this page of Tamil Cinema Bio, we shall have a look about one of the latest Tamil movies, Chekka Chivandha Vaanam which is one of the multi starer movies in Tamil Cinema, under the direction of Tamil cinema Director Mani Ratnam.

Three National Award winning Director Nasirudheen Shah, has acted in a stage drama named as Einstein last Sunday. When he spoke regarding this he told that this drama Einstein is a short form of Einstein’s life.

In this TamilCinemaBio page, we have rendered the full features of the Tamil Movie O Kadhal Kanmani which is also named as OK Kanmani in short. This Tamil Film O Kadhal Kanmani that is released on April 17, 2015 in India is a super duper romantic movie with a typical dramatic flair in which Dulkar Salman has done the male lead role ( Hero ) and Tamil actress Nithya Menon has done the female lead role ( Heroin ) under the direction of Tamil cinema director Mani Rathnam, music by A R Rahman and the cinematography has been done by P C Sree Ram.


If a couple is living separated after marriage or if a couple is living together without getting married, something that’s travelling between the couple is one and only LOVE. Manirathnam is a personality one who is withholding success only with a single worded concept which is nothing but the same LOVE again.

LOVE May perhaps travel along with/ anywhere/ within anyone. This seems to be the Storyline of any Manirathnam films. Two people with different destinies and similar thoughts about no belief in married life are falling in love. They do not just love, but they start to live together. As the people in their families are forcing them to get married, is their life continuing with their marriage or they get separated and go towards their own destinies? Is the end of this story!

Artists Contribution: With the bouncing act of Thulkar, he has not only got the name as the latest generation Love Hero but he is also coming around this film industry as a stealer of many of the young girls hearts.


Nithya Menon one who is appearing as Thara has also acted very generously. Her facial expression and naughty dialogs has gained lots of applause from the audience.

Lyrics’ of Vairamuthu and music by A R Rahman can be said to be the great pillars of this Tamil Movie O Kadhal Kanmani (OK Kanmani).

The dialogs of Manirathnam and the characters in this Tamil Film O Kadhal Kanmani (OK Kanmani) cannot be criticised in any ways.

It can be said that P C Sreeram is the strong support for this Tamil Movie O Kadhal Kanmani (OK Kanmani). P C Sreeram has given the completeness to this film with the help of his cinematography.

In overall analysis, How is the story of this Tamil Movie O Kadhal Kanmani (OK Kanmani)? Bouncing act of Thulkar, cinematography of P C Sreeram, music by A R Rahman and a story without target by Manirathnam, in total O Kadhal Kanmani is targeting towards the Love path and success of Manirathnam.

At this situation there is a talk going on that, Tamil cinema director Mani Rathnam called Pooja Hedge to act in his movie pairing with Dulkar Shalmaan. But as Pooja Hedge was busy with her hindi movies, she has refused to act in that Mani rathnam movie.