In this page of Tamil cinema bio, we shall look about one of the latest interviews of Tamil actress Jyothika which was recorded in the end of 2019.

Acting with Tamil actor Surya is difficult, acting with Tamil actor Karthi is easy: Jyothika. Acting with Surya is difficult. Jyothika said in an interview with Tamil movie Thambi that it was easy with Karthi. Thambi is a film directed by Jeetu Joseph and starring Karthi, Jyothika, Sathyaraj, Sowkar Janaki, Aswant and others. Jyothika's younger brother Suraj produced this film under Vikom banner based on getting first copy of print basis. Govind Vasanths composed music, All the work of the film completed and film will be released on December 20.

Actress Vadivukkarasi has given her experience in a video statement to one of the leading Tamil Website. In her statement she said as follows:

My native place is Ranipet situated near Vellore. My father name is Shanmugam, interested in Cinema. He is financing for Cinema, also acting in small characters in movies. Due to some unforeseen circumstances the entire family has migrated to Chennai. Leading film director A.P.Nagarajan is my uncle. This means he is my mother's elder sister's husband. Even though it is very hard to go to theater to see movie. I started to continue my school studies. But due to family situation unable to complete my studies. But have studied up to PUC.

Vijay TV anchor Divya Dharsini has given an open interview about her latest gossips, controversies and her latest show Anbudan DD which has been getting telecast ed in Vijay TV. The following are the questions and answers asked and given by Divyadharsini; 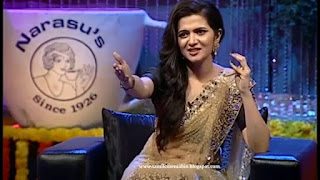 What is the reason for the name change from Coffee with DD to Anbudan DD?


There was a thought in my mind for many days to do something different in the program ( Coffee with DD ). Coffee with DD is a fun filled show, so we wanted to make the same show with fresh thoughts by including more positive things in it. So I took a good time break to in search nice team for this fresh look of Anbudan DD.

What about the appreciations you got after the release of Tamil movie Kaaka Muttai?

Here is the latest Interview with Tamil actress Amy Jackson:

Dont you have language problem when acting in Tamil movies?

I will give birth before marriage - Tamil actress Shruti Hassan

Tamil actress Shruti Hassan has given a controversial statement to the media that she will get pregnant and give birth to a child before marriage.