Again Gossip between Anjali and Jai

There is always gossip revolve around celebrites some may accept some wont.Recently There is a love gossips around Tamil actress Samantha and Telugu actor Nagasaithanya .Even though they refused at first later they accepted and engagement happened few weeks before.Same like this before this pair Anjali and Jai pair were talked. From their first movie they paired Engayum Eppothum their chemistry were worked well in movie and in real life too.After some days they were seperated due to some personal problem in Anjali life. 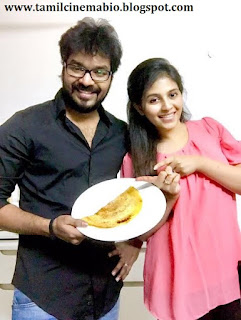 In this page of Tamil Cinema, we shall look about Tamil movie Iraivi under the direction of Tamil cinema Director Karthi Subbu Raj with multi star acting that Tamil actors S J Surya, Vijay Sethu Pathy and Bobby Simha with the music of Tamil cinema director Santhosh Narayanan.

The shooting of Tamil movie Iraivi in which Tamil actors Vijay Sethupathy Bobby Simha, S J Surya and Tamil actress Anjali are doing the major roles under the direction of Tamil cinema director Karthik Subburaj has been started today ( 21st May 2015 ) in Chennai.

The Chennai civil court has released a non bailing warrant for one of the famous Tamil cinema actresses Anjali. This decision by the court is followed by previous notices to Anjali for making her present in the court.


The main case for this situation has started from the Tamil cinema director Kalanjiyam who has actually introduced Anjali to the Cinema industry stating that Anjali did not come for the shootings after giving call sheets to this Cinema director.

In this page of www.tamilcinemabio.blogspot.com, we are going to see about one of the famous Tamil cinema actresses, Anjali.

The very first noted performance of Tamil actress Anjali’s acting was in the Tamil movie Katradhu Tamil with the Tamil actor Jeeva and for the same movie, she got the Filmfare award of best Female debutant.

The place of birth of Tamil actress Anjali is, Magalikuduru in Andhra Pradesh, India. Even though Anjali was born in Andra, she learnt her education in Chennai city of Tamilnadu. In the beginning, after the end of the studies of Anjali she preferred the modeling and once she has got chosen by the director Shiva Nageshwara Rao. Her first film entry was in a Tollywood movie, namely Photo, which was a thriller core story. Anjali says that she has pursued the cinema career which is the dream of her father.

One of the latest buzz in Tamil cinema is that the Tamil actresses, Anjali and Oviya are doing glamourous role in the Tamil movie Kalakalappu which has been directed by one of the best Tamil cinema comedy movies directors, C. Sundar who is the husband of Tamil actress Kushboo.

The buzz is that, Tamil actress Anjali has expressed her interest by herself to the director Sundar C of acting in glamourous scenes. Even though the role of Anjali in Kalakalappu is a homely one, she has been offered to show some skin in the songs of the movie.