One of the famous comedy actors of Tamil cinema Bonda Mani has been admitted in Chennai Omandhoorar government hospital in ICU ward today - 26 May 2022.

Bonda mani's native place is Sri Lanka. He got introduced in the Tamil movie Pounu Pounu dhan in the year 1991 in which Bagya Raj did the lead male role. After that he acted in many Tamil movies as comedy actor. Some of his good going movies are, Winner, Sundara Travels, Marudha Malai, Velayudham, Jilla and other big movies in Tamil cinema.

Tamil Movie Mersal Casts and Crew, Over view and Storyline 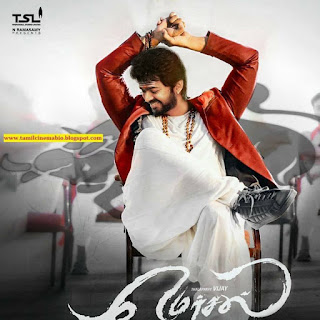 Mersal (2017), action mystery thriller Is getting released on Diwali October 18th. Actor Ilayathalapathy Vijay acts in triple roles with three heroines Samantha, Nithya Menon and Kajal Aggarwal playing the female-lead roles. The film is directed by Atlee and music director of the film is A.R RAHMAN.

In this page we are going to see about the highly famous Tamil cinema comedy actor come multiple roles playing actor, Vadivelu. First, we shall see about the Biography of Vadivelu before looking at his profile, filmography.
The date of birth of Vadivelu is 10th Oct 1960
The current age of Vadivelu - 60.
The birthplace of  Vadivelu is Madurai, Tamilnadu
The name of the wife of Vadivelu is, Saroja
Other names of actor Vadivelu are, Vaigai Puyal Vadivelu and Vadivel.
To say in short, Vadivelu is one of the very few, fine comedian-actors in Tamil cinema.
Read more »
No comments:
Email ThisBlogThis!Share to TwitterShare to FacebookShare to Pinterest
Labels: Profile and Biographies, Tamil actor Vadivelu, Tamil actors, Tamil Comedy Actors

When will Tamil actor Vadivelu come back and act?

Tamil Movie Comedian Vadivel has given a speech to the press recently about his absence from the Tamil cinemas for the short period of time. Vadivelu has said that, he will be acting in Tamil movies continuously for sure in the future. He has given a short break from Kollywood by his own decision - Vadiveku added.
In the last election, Vadivelu was caused as speaking against the ADMK party of Tamilnadu by exceeding the limits an dhe was presented in the Natham court of Chennai. when he came out off the court, he spoke like this.