This Web Series has taken one of the interesting things that happened to the Indian Cinema Industry starting from Tamil Cinema and affected the revenue of the Industry heavily through online Movie Piracy.

Before talking about this Tamil Web Series, we shall have a look at the Tamil Rockers website which is the baseline of this web series:

Tamil Rockerz - this name was so popular in Tamilnadu and even throughout India because this website was releasing many Tamil Movies and other language movies in India and even some Hollywood movies without any permission from the Film Production teams or from the Government. from the late 1990s till now.

In this page of Tamil cinema bio, we shall look at the top 10 bodybuilders of current Tamil cinema which also contains the other details about those bodybuilders such as their age, height, weight, and other body measurements.

note: all the below-mentioned data are as of today - March 2020.

In this page of Tamil cinema bio, we shall have a look at the Tamil cinema news for 12th February 2019, shall have a glance on news about Yesteryear Tamil Heroine Roopini to act in Tamil Films again and yet another hot broadcast about Tamil Actor Arun Vijay teaming up with Tamil Actress Rithika Singh in a forth coming Tamil cinema Boxer

Which is a good movie, Let it be decide by people - Tamil Actor Arun Vijay

Which is a good movie, Let it be decide by people - Tamil Actor Arun Vijay

Tamil Actor Arun Vijay in outrage Which is a good movie let it be decide by people there is no backtrack in pongal release actor Arun Vijay informed. Kutram23 is a movie in Arivazhalagan direction and Indhar kumar production, acted by Arunvijay ,Mahima and yet some more people. This movie was expected to release on pongal.

Including Tamil Actor Illaya Thalapathy Vijay's Bhairava movie there are six movies, going to release for pongal. There is also a tough competition among the movies that which is going to back down. It is also to be noted that there are no movies back tracked so far. In this situation Arunvijay tweeted in his twitter page, that i am not competing with any legends, am here to do my work with full dedication, so please don't hit me from back. Live and Let live ,like he tweeted.

In this page of Tamil Cinema Bio we shall look about the Tamil movie Yennai Arindhaal in which Tamil actor Ultimate Star Thala Ajith has done the main male role ( Hero ) under the direction of Tamil cinema director Gautham Vasudev Menon with the music of Tamil cinema music director Harris Jayaraj. We shall start the article with the Casts and crew section.

Tamil cinema director Gautham Vasudev Menon who has been directing the next Tamil movie of Tamil actor Thala Ajith which is not yet named and widely called as Thala 55 has given an interview about the movie Thala 55 and has revealed some interesting facts and interesting shooting spot events below. The interview of Gautham Vasudev Menon started with his words about the lyrics of a song from Thala 55 that "Oru Velli Golusu Pola Indha Boomi Sinungam Keezha, Aniyadha Vairam pola Andha Vaanam minungum mela" and Ultimate Star Ajith Kumar is singing this song on screen and this song is establishing the role of Ajith in thala 55 - says Gautham Vasudev Menon.

Then the director Gautham Vasudev Menon revealed the basic story line of Thala 55 that the story is the thin line of the travel of an youngster from his 28th year of age ( Entering the marital life ) upto 38th year of age ( 10 years of life after marriage ). So there are 4 number of different character looks for Ajith in the movie Thala 55 that one of the portions of the role is coming with the look of curling haired Ajith Kumar, Ajith with Salt and pepper look and two other looks and Ajith has done many things to show the difference between those four looks of him in the movie. Ajith has done ocmplete work outs and became fit for an action block in the movie, Then the people who were traveling in his real life for more than 10 years are telling that Ajith is totally looking different and they like the looks. If this is the same reaction from the audience after the release of Thala 55, then the part 2 of Thalla 5 can be expected -says Gautham Vasudev Menon.

There are so many news and updates have been coming across about the new Tamil cinema planned with the combination of Tamil actor Ajith Kumar and Tamil cinema director Gautham Menon; importantly about the music director of the movie and about the Villian actors to act in the movie. The heroin of this Tamil cinema would be Tamil actress Anushka Shetty and the production banner of this movie is A N Rathnam who has done many block buster Tamil movies like Ghilli, Dhool, 7G Rainbow Colony etc., 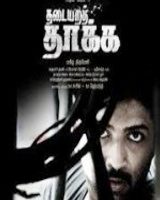 In this page of Tamil Cinema blog, I am going to discuss with you the Complete Review and Story of Tamil movie Thadayara Thaakka in which Tamil actor Arun Vijay has done the lead male role. Before going to the detailed Story and review of this Tamil movie, we shall have a glance into the casts and crew employed in the film, Thadayara Thaakka.