Amithap bachchan and Trisha signed the contract to act in this movie. It has been confirmed that Trisha has signed the contract to act in the movie Ponnyin selvan directed by Maniratnam. In continuation to the movie Sekkasivantha vasnam., Maniratnam is getting ready to direct Ponnyin selvan. LICA production is producing this film. Jeyam ravi, Vikram, Karthi, Aishwarya rai, Keerthy suresh, Lal and others are starring in this movie.
Read more »
No comments:
Email ThisBlogThis!Share to TwitterShare to FacebookShare to Pinterest
Labels: Madras Talkies, Tamil Actress Aishwarya Rai, Tamil Actress Trisha Krishnan, Tamil director mani ratnam, Tamil movie Ponniyin Selvan, Tamil music director A R Rahman 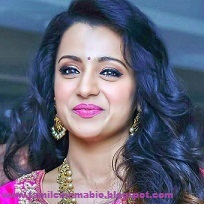 
Bookmark this page for more updates about this Upcoming Tamil Movie Kaathuvaakula Rendu Kaadhal like Certification, Review and theaters in which the movie releases.

In this page of Tamil Cinema bio, we shall look about one of the Tamil actress Trisha who has been in Tamil cinema industry for more than 10 years of time.

n this page of Tamil Cinema Bio, we shall look about Tamil movie Kodi, including its Casts and crew, Story Line and Review with complete details;

Other actors in Tamil movie Kodi :

Break up between Tamil actress Trisha and Varun manian !!

We already heard about the wed lock announcement of Tamil actress Trisha that she is going to marry Mr. Varun who is one of the Tamil cinema producers. But now we have got a hot gossip that the pair of Tamil actress Trisha and Varun has got broken up and the marriage which was engaged by the parents of them also would be cancelled.

In this page of Tamil Cinema Bio we shall look about the Tamil movie Yennai Arindhaal in which Tamil actor Ultimate Star Thala Ajith has done the main male role ( Hero ) under the direction of Tamil cinema director Gautham Vasudev Menon with the music of Tamil cinema music director Harris Jayaraj. We shall start the article with the Casts and crew section.

We all know that one of the most awaited marriages of Tamil cinema that, the marriage of Tamil actress Trisha Krishnan has been fixed and the official announcement of Trisha's marriage to the public and media was done by Trisha herself through the social network namely Twitter. The bride of Trisha is Varun manian who is a leading business men in Tamilnadu and Varun is also a Producer making Tamil movies having the banner name of Radiance media group. The Tamil movies came with the production of Radiance Media group are Kaaviya Thalaivan and Vaayai Moodi Pesavum.

Every Tamil cinema is getting its shape with the work of hundreds of workers including the Tamil Cinema directors, assistant directors, music director and his crew, production team, visual effects team, stunt master and is crew, cinematographer and his crew, lighting supervisor and his crew, then the workers engaged with the all other works like, travel, food, accommodations and last but not the least; the acting artists. From the time since the cinema was discovered, at the initial stage with the name of drama, these acting profession has been given the very first priority when the audience expressing their review / response about the drama / movie. Because the very first thing getting into the eyes of the audience is the artist who is acting the roles. Even though the art department's work is also getting into the eyes of the audience, he ( the audience ) is looking at those fine sets only as the supporting things for the artist to perform the role.


In this so important part ( acting artists ) part of the cinema, we got so many artists coming around the script of the movie / drama. But mainly the cinema will have a main male role ( Hero ) and a main female role ( Heroin ). Even thought there are few Tamil movies came without having a heroin in it, 99.9% of Tamil movies are having heroins. So, in this article of Tamil cinema, we are going to see such important Tamil actresses / Tamil cinema heroins only. I got the idea of writing this article after seeing the Tamil movie Endrendrum Punnagai and Raja Rani. One of the rare things happened in those movies that the heroins of those movies are elder than the heros of the movie in real life; that Tamil actor Jeeva has one year of age lesser than the age of Tamil actress Trisha Krishnan who did the heroin role in that movie and Tamil actor Jai ( date of birth April 1985 ) has 6 months lesser age than Tamil actress Nayantara ( Date of birth November 1984 ) acted as on screen pair for the Tamil movie Raja Rani under the direction of Atlee.

The present movie of Anushka in Telugu is Rudrama devi and Baahubali, among these two movies, Rudramadevi shotting has got finished and the shooting of Baahubali has been going on. By this time, the current age of Tamil actress Anushka Shetty is 32. So the parents of Tamil actress Anushka have beed looking for a bride for Anushka Shetty recent days and they have found a bride for Anushka and he is a business man it seems.

It was decided not to go and participate in any events happening in the country Sri Lanka by all the Tamil actors and actresses. Even the music events also have been prohibited by the Tamil play back singers recently for the same reason. There are many objections have been getting raised opposing who and all participating in the events in Sri Lanka regardless of Tamil actors / Tamil actresses or music related guys from the Tamil cinema industry.

The date of birth of this top level Tamil actress Trisha is 04th May 1983. So, the current age of Trisha is 31 and will reach the age of 31 with the upcoming May month. Place of birth of Trisha is Tamilnadu, Chennai city. Trisha started her acting and modeling career from the year 1999. Even though Trisha was born in Chennai, she has been acting and getting successful in both Tamil cinemas as well as in the Telugu Cinema. She has also acted in few Hindi languages, Bollywood movies too.