Padma Sree Sowkar Janaki, aged 87 years, a legend actress in the film industry. for the past 70 years, acted in Tamil, Telugu, Hindi, Malayalam, Kannadam and other languages. also acted in more than hundreds of stage draas has shared her memories. 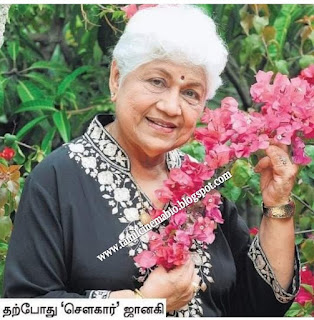 I born at Rajmundry in Andhra Pradesh. after completing his study in paper technology and completing his job, my father returned from England. Ours is an ordinary brahmin family, so I had no interest in acting in cinema. I was twelve years old when my father came to Chennai for his job. we were living in a house at boag road. I was participating in kids programme in radio station. After hearing my pronunciation P.N. Reddy, the owner of Vijaya studio came to see me after inquiring about me. when he asked me, will you act in movies, I said yes to him without any hesitation. When I went and told this at home, my mother fought with me in angry and my brother beat me. In this situation my parents searched for an alliance on urgent and emergency basis and got me married to Srinivasa Rao, a radio engineer at Guntur.
Turning point after wedding: My husband had no permanent job and we have suffered a lot for day to day food. during which I explained my acting chance which I got before my marriage and seeking his permission. He said no problem and given permission to act. When I went and approached P.N.Reddy with my three month old baby in my hand, he told me that he approached me to give the role of heroine, but the movie has already completed. After I explained my family situation, he got me a chance to act in a movie produced by his brother. N.T. Rama Rao was hero, which was my first movie, I got Rs. 2500/- as salary for that movie.

The name of the movie is Sowkar. The film was success and I got good name from it. but I have not got any further acting chance ad it had been told by the industry people that I am too young and too slim and am unfit for heroine role. During that time I got a chance to act in the movie Valayapathi produced by Sundaram of Modern Theaters. Valayapathi was released on the same day on which Sivaji Ganesan's Parasakthi also released. Even though the movie was successful but not upto the expected level. Then I got chance to act as heroine in Telugu which was remaking of Moondru Pillaikal produced in Tamil version by Gemini. Screen and drama are both of my eyes:

I got introduction of Balachander sir through drama only. During that time he was owning a drama team and it's name was Rakini Creation. there was no salary in amature drama team and we have to bring our own dress and costume materials for the drama. Bit I did that for that satisfaction of my heart and soul. For the first time I acted in his drama Meluguvarthi (Candle light), Nagesh, Srikanth and others were acting in that drama. I acted in the movie Kaviyathalaivi under the direction of Balachander and I was 40 years old during that time. I have done the dual role as mother and daughter in that move and it was a successful movie. Puthiya Paravai has brought touring point: I have acted in M G R's Panam Padaithavan, Olivilakkuand other movies. Jayalilatha acted as my daughter in the movie Motor Sundaram Pillai. She was very young woman during that time. She used to come to my house and play with my daughters. I was very happy when she became to her highest as I have seen her as young women.

I was living in a house next to Kamaraj's house at Thirumalaippillai road in T.Nagar. I used to ask him as can take water from your house and he used to tell with laughing ennamma ippadi kekkura and he told me that he is telling everyone that I am living next to sowkar janaki's house, like that I got respect and honor from all the people and leading my happy life. No one from my family has thought of entering into cinema industry. But it was surprised me when my grand daughter Vaishnavi's entry into the cinema industry. My glamour role in Sivaji Films Pudhiya Paravai was major turning point in film career.

I got very very good character roles. Balachander's Bama Vijayam, Ethir Neechal, thillu mullu has given me a different status. I went and met him after his son's death. I didn't go when he died as I don't like to see him because he was in my mind and soul and sublime director. I was unaware of my film industry calculation due to which I have not got my position. I went two times in search for my acting chance. The first one was Sowkar and the second one was Olivilakku. when I called over phone to ramapuram garden and told brother M G R that I will act in the movie olivilakku, immediately he has contracted me with full of happiness. Iraivaa Unmaalikail has become very popular and famous when he was admitted at hospital in Brooklyn USA. when I went and met him after his return he told me with happily that this song has got good response in all cities and villages.

It was a very good and big luck to act with sivaji ganesan. We can't see anyone in future to act like him with total involvement. M G R has got good humanity and treat everyone with due respect. he is not only an actor, he knows all techniques about cinema. I always used to call him as Anna(brother). Me and Rajni has same unity: I acted in Thee, Siva with Rajnikanth. he is like my son. His birthday and my birthday falls on the same day as my date of birth is December 12th only. Kamal touched my soul: Kamal acted as my brother in the film cinema paithiyam. I can't keep quiet without telling his generosity. I acted in Hay Ram both in Hindi and Tamil version. But all scenes has got removed from the film. I got admitted in the hospital in the year 1999 for my heart surgery. During that time Kamal's manager came there and paid all the contracted amount to me, which was very helpful during my surgery. I came in a scene in that move where my face is invisible.but he has paid the entire amount and nobody had got human kind like him. I got good chance to act like these heroes. But I don't know the reason why the Tamil film industry forgotten me totally. I have been approached by telugu film industry to act. I am acting in advertisement films..I think that I am the one who is living and acted as heroine from the year 1949 to 74.
Sowcar Janaki was awarded Padma Sree by Government of India in the year 2022.