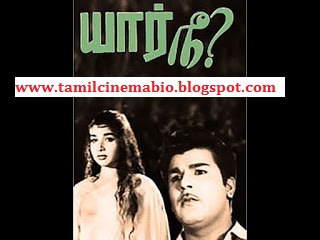 It is a black-white tamil movie of  psychological thriller-mystery genre directed by Sathyam and produced by P.S.Veerappa. It was a remake of hindi movie named Woh kaun thi ? directed by Raj Khosla and  starred by  Sadhana Shivdasani, Manoj Kumar and Prem Chopra. In tamil,  Jaishankar and Tamil Actress J. Jayalalitha did  lead roles in the movie. It is box office hit. Later, it was remade into telugu under the name Aame Evaru ? directed by B.S. Narayana and starred by Kongara Jaggaiah and J. Jayalalitha.

It is one of the finest suspense movies bereft of artificially suspense-building elements. Though there is no exaggeration, story line is so convoluted.  Screenplay has deviated from the storyline to entertain the audience in a thriller and mystery based genre. The pace at which the convolutions are unwinded is uneven, scope for still better screenplay can be in these areas. Characterization seems to be typical one of its time in Tamil cinema, but good acting by lead actors.

Story is about a person who is of sound mind, goes to the edge of losing reality and believing  super-natural and reincarnation ideas, based on the events happening around him, events happening  beyond his perception, and the actions of people, with different motivations, around him. What made him to deviate from the natural well being is the core of suspense.

Entire screenplay of Tamil movie Yaar Nee is focused on the lead character and his thought process. Movie is heavily loaded on the very same character like the character Edward "Teddy" Daniels played by Leonard DiCaprio in the movie named Shutter Island which is directed by Martin Scorsese, in fact, it is only best way to take this story in visual form.  If remade, one who is going to be in the role should have good acting skills.

It is worth to be remade even now, here the story is implied.  But the screenplay should be better than that and the one who writes it, should have to do market research or should at least  have intuition on how the reception would be from current Tamil audience.

When you are leisure, had a nice meal, want to watch a movie with blank mind. Then, experience of watching the movie will be good.

First dialogue of this movie is its title, Yaar nee ?