Soon after seeing the Engagement photos of Tamil actress Priya with director Atlee all of us the Tamil cinema audience got surprised with happy. With happiness, we got a thousand questions when did this couple fell in love? how it was not disclosed this much time? etc., So the following article contains the complete interview with this cute couple, Tamil actress Priya and director Atlee.


Interview with Director Atlee about his love story with Tamil actress Priya:


Atlee started talking about Priya Atlee knows Priya from the period when Priya was acting in Kana Kaanum Kaalangal serial on Vijay TV.
Role of Siva Karthikeyan in the Love Story of Atlee and Priya
Also as Siva Karthikeyan is a good friend of Atlee, he uses to go to the sets of Jodi Number 1 show on Vijay TV too. Siva Karthikeyan is the main reason for Atlee to get a friendship with Priya.
After that Atlee made a short film namely Mugaputhagam by keeping Siva Karthikeyan in that movie. Priya had come to the premier show of that short film, Mugapputhagam with her family. As the family of Atlee had also come to that premier show, both families of Atlee and Priya became family friends also, Atlee adds here that he liked Priya from that day and all of my friends except Priya knew that I have a small love for Priya.
Priya about Atlee: First Impression:
When Priya spoke about their love story, she says that it was a short period of love we had including wedding time.
When Priya spoke about Atlee, she says that I know Atlee for about 7 years before marriage and their first meeting happened in an audition. At first, I had a curiosity about the name of him 'Atlee' who is that. The first phone call Atlee made was to my mother and as I had curiosity, went and inquired who is that Atlee. Then our friendship began and whatever the project comes, I used to discuss it with him.
Who proposed first in Atlee - Priya Love Story?

After the release of the movie Raja Rani, he and Priya were talking together and Priya said that the parents of Priya started looking for a Bride Groom for her. Soon after telling them that, I ( Atlee ) told Priya whether he can give the Jaathagam of Atlee to the parents of Priya? The reaction to the playful talk of Atlee from Priya is a laugh in the beginning.
At this time a small gap was generated in the interview. At this gap we could see that there is a cute shy generates on the face of Priya and she starts talking she laughed by thinking about what Atlee said about Jaathagam with fun only in the beginning. But Priya has felt that Atlee is telling this in a serious manner inside her heart. So Priya has told Atlee to come to her house and talk with the parents of Priya.
For that, Atlee asked Priya to reveal their love matter to Priya parents and if they agree to the marriage, then Atlee will bring his parents to the house of Priya with the Jaathagam of Atlee. So, Priya said their love matter to her parents and they have asked her to talk with Atlee and ask his parents to come with his Jaathagam. But the next day a big comedy happened ( actress Priya laughs ).
Now director Atlee starts to talk; The next day, Atlee has gone to the house of Priya and gave the Jaadhagam of him to the father of Priya. After that, both of the parents started talking about the history of their own stories after getting the Jaathagam and keep aside. Then only both Priya and Atlee came to know that the father of Priya has asked to bring the Jaadhagam only for formality and the family of Atlee already like Priya and like talked and agreed already, both of the families agreed to the marriage without having any deep discussion. When Atlee finishes this sentence, Priya gets a happy bright face.
First Surprise Atlee gave to Priya after marriage:
Priya explained as follows;
During our honeymoon when we were in Maldives just 2 days back to my birthday, Atlee was busy with his laptop always. I did not ask him the reason thinking that he might be working.
On my birthday we went boating and the people there said the sea is rough and we have to go up the deck. When we went there there was a cake surrounded by candles on floating boat. 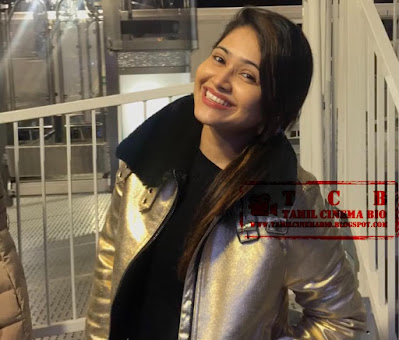 Then the boat people said we have to move to an inhabitant island which is nearby. Then we went there. Soon after anchoring the boat, a dinner table came there with dinner and I got surprised by that.
Then a projector came and started playing some videos and photos of our wedding, our past days of friendship.
I started crying and all of them there started thinking why is this girl crying!
When Atlee said the same thing he said as follows:
I planned for celebrating where no one has celebrated before. There are so many islands around Maldives and I chose the best one with romantic views where no one has celebrated there before as per my research with the hotel we stayed. It was possible because of the friend I got Mr. Karthik there and others.
What surprise Priya has given to Atlee
On his birthday of Atlee, Priya arranged for 29 gifts such as a remote car for him and giving him every hour and less time.
Part of G V Prakash Kumar in Priya Atlee's love story:
Music director G V Prakash Kumar is the one who posted the photo of Atlee and Priya together on social media when no one were knowing about it.
After he shared the photo, when Atlee opened his laptop, he had more than 4000 notifications and he got shocked.

Actor Arya has wished Atlee that
You are very lucky. When Jai was informed about their love matter of Atlee, he has got shocked and asked Atlee - What? Marriage for you? and Atlee thinks that Jai has not figured out even if Atlee is in love.
Then Atlee adds that Priya is like a baby and she is the inspiration for the role of Nazriya Nazim in the movie Raja Rani.
Fights between Priya and Atlee
The biggest fight that came in between Atlee and Priya is only for silly things like Why did not you attend my call.
The nickname for Priya kept by director Atlee is Paappa and the reason he says this nickname is that he sees Priya as a grown baby.

Atlee is adding that he has bought and given an iPhone to her and she has painted Atlee in a glass and gave him and he is adding that all girls are like this only. As Atlee is teasing all the girls, Priya beats Atlee on his back.
When Priya talks about Atlee, she says, Atlee is so caring and she has not gone anywhere alone, and where ever I go my mother comes with me. Also, Priya adds that she does not ask anything to her mother, and her mother of Priya will buy and give whatever Priya needs. That same kind of caring is with Atlee also - actress Priya says.

On hearing that, Atlee gives a counter that, only because of this Priya's mother agreed to this marriage. Because Priya's mother is so pity and now the purse of Atlee has started getting slim than before. Hearing that, Priya made ear torsion on Atlee.
Priya and Atlee couple has got a baby boy on 03 February 2023.
Priya Atlee Marriage images: